It is indeed a pleasurable coincidence that I am writing this Appreciation of my friend Mai-Markand’s soul-stirring work, on the auspicious day of the 20th anniversary of the Mother’s Installation by him on the 2nd of September 1932. I had the good fortune to meet him six years later when we were both serving in Poona. He was then Rao Saheb M.R. Dholakia, L.C.E., Land Acquisition Officer. Even when he was still in Government service, he had long been convinced that his mission in life was to teach and preach Mai-ism, and he set about publishing brochures on the subject. One of the most eloquent brochures he gave to the world is “ Mother’s Message “ of Mai-ism, which was published in 1944. Mai-ism has its origin in the Motherhood conception of God Almighty and that conception has been elaborately developed in his present volume. This has necessarily involved a good deal of labour, but the author has succeeded in explaining every aspect of Mai-ism in great detail. He has developed the subject by citing his own personal experiences even when he was a mere schoolboy. In fact, the book is full of instances of personal experiences which go to convince the reader. He himself says in paragraph 727 (p. 642):-

“The Founder has one peculiarity. He mostly writes or

speaks his own experience only, because they are matters of his

own full conviction, regarding which, he can speak to others with

His Motherhood conception of the Almighty is intended to be and is capable of being, adopted by everyone, whatever his creed, caste, nationality, or birth-religion. Even one who does not believe in the existence of any God may be a Mai-ist if he believes in the ideal of loving and serving all selflessly. Mai-ism lays emphasis on “love, service, devotion, and self-surrender”. The author says (p.456), “If you want a religion of only one word, it is that of SHARANAGATI (self-surrender)”, a very noble idea indeed!! On p. 570, he says:

“Religion is to be seen in the life you live, and not in the

words you speak or write or in some particular external ritualistic

actions or observances, that people call as religion”.

This is the pith of Mai-ism. What is Emancipation or Salvation, according to Mai-ism, is dealt with in paragraph 677 (page 579), and the various ways to attain it, as laid down by different religions and different philosophers and saint, are described in the succeeding paragraphs. But the author’s message is contained in paragraph 773 (p. 729):

“For worldly man and woman, I recommend nothing so

emphatically as Service and Surrender. If they don’t know even

the A.B.C. of that most formidable thing spoken of as “Religion”,

they need not droop in despondency. Serve your parents, serve

relations, serve your neighbours, serve all. No technique is required

therein. Mother, Herself will lift you up. Mother has Herself

promised. And that is Mai-ism”.

To a casual reader, the book may appear to contain a frequent repetition of certain ideas, but the obvious object of the author is to impress those ideas on the mind of the reader, and make him imbibe the doctrines of Mai-ism and realize the truth of the precept given on page 690:-

“Your rights and claims on your Mother are proportionate to

and based on your love, service, devotion, and surrender to Her as

The author has brushed aside importance to, or the indispensability of, mere external methods or names or forms of worship, rituals, prayers, or need for any limited isolated groups or folds or any particular places or shrines and he has, in his broadest view and mind, deeply touched the Universally-needed essential of living in thought, word and deed, a life of “Love to all, Service to all”, “Devotion to and cheerful unconditional Self-Surrender to the Supreme” by whatever name one may call or conceive the Supreme for oneself. Not only that, he has throughout tried successfully to live such a life, in spite of severe ordeals, hardships and not by any means affluent and congenial circumstances in life as a worldly man. The author prescribes as the most practical ordinary and simple psychological conception of God and Religion- that of “Mother and Child”- with the minimum or practically no qualifications, requirements, or “Sadhana”, or rituals or ceremony needed, for this straight, simple and direct approach to the Highest Almighty. “Love and Mercy” attributes of God are deeply emphasized. “God is not to be feared, but loved”.

In particular, to the common worldly man, the author openly declares that, under Mai-ism, prayers for legitimate help and needs in one’s Samsaric (worldly) material or mundane life, and for relief from misery, calamity, dangers, fears, and sufferings, are quite proper and rational; and he declares that any theoretical theology or philosophy or religious talks which rule out prayers for Divine aid, or which do not take note of the actual problems of the human worldly life (individual or national) are unhelpful and irrational and cannot be convincing or appealing to the generality of mankind. Even the worst sinner and criminal have a right to look up to Mai for his reform and redemption. “The weakest child is the most cared for and dearest to its mother”.

The posterity (as in the case of all Saints and Incarnations, in the past) would decide how to profit by or how to receive and accept “Mai-ism” and the author’s sayings and his life’s work. Today, no one is known to have revolted against its tenets of quite Universal wide outlook and application. Several who look upon the author as a (Motherly) Saint or Sat-Purusha, (however with no Saintly robes), are his devotees, followers, and disciples; some there are who regard him as perhaps an Incarnation of Divine Mother, next to Sri Ramakrishna Paramahamsa and call him “Mai-Kaka”, “Mai-ji”, “Mai-Swarup” and “Mai-Markand”. But, unquestionably, most who regard him as a very good-natured, kind-hearted, generous friend and guide; they go to him for consolation, sympathy, words of cheer and hope, for blessings and for his prayers to Mai in their personal worldly troubles of various sorts- such as, sickness, unemployment, marriages, debts, poverty, calamities, troubles in family life, in their jobs, etc.

One can easily appreciate that the author is passionately thirsting for readers and listeners and has a plenty to narrate and impart for the “awakening” of, or for the benefit of, everyone who is interested. Perhaps, the tenets of “Mai-ism” are not entirely new or novel; but its particular one-pointed emphasis and concentration on the simple Mother-Child conception, on Universality, on love, mercy and service to all (in actual life, thought, word and deed), on the proper attitude towards worldly duties, women and wealth, amongst others, are quite distinct and unique, and are bound to be highly valuable to the modern conditions and times, in bringing about a greater measure of peace, goodwill, contentment, happiness and prosperity to the world, individuals, countries and nations.
This book is to be highly commended for its thought-provoking explanatory elucidation of the said tenets of Universal application, and for the inner revelation of the spiritual experiences of the author and is meant for the benefit of English-knowing persons of all creeds, communities, and nationalities.

Before concluding, I must express my gratitude to Shri: A.C.S. Charri, B.A., B.L., Advocate, for the pleasure he gave me in discussing some aspects of Mai-ism. The charm of Mai-ism lies in its simplicity, and the public owes a debt of gratitude to the author for expounding it in such an elaborate manner in this book.

May the Divine Supreme Mother bless this book, its saintly author, its readers and all of us.

[ Mai-ism was represented at All Faiths' Conference at Nasik (India) in 1933 and the Indian Philosophical Congress at Poona (India) in 1934. Maiji was invited to Japan for the World Religious Congress in 1955. Maiji was the Sub-Councillor-in-Chief of the International Religion Federation which was started in Japan in 1955

Maiji had been elected as VICE PRESIDENT and spiritual MINISTER for PEACEFUL HUMAN RELATIONSHIP & Universal Religious Alliance ( U.R.A.) in Havana, Cuba for SIX YEARS FROM 1959 TO 1965.

As stated in the Preliminary Report pertaining to the Congress held on 23 October 1959, the complete attendance at the Congress was around 3800 persons 2184 of which integrated about  318 different official delegations, which came from 96 different countries. The representation was of  449 different sections and sub-sections of religious and various organizations. Furthermore, 43 countries had sent their official observers.  Appreciation and truest understanding about Mai-ism by the said World Congress would be evident from these words; " We have received valuable literature from all quarters of the world, which amply reveals that the regeneration of man as at the hand, as well as that a new age ( Aquarian ) is being ushered in taking shape of  a brand new Spiritual Civilisation. We recommend such sources of research. We recommend Mai-ism and the Mai-Institute of Santa Cruz West, Bombay - 54 India." ] 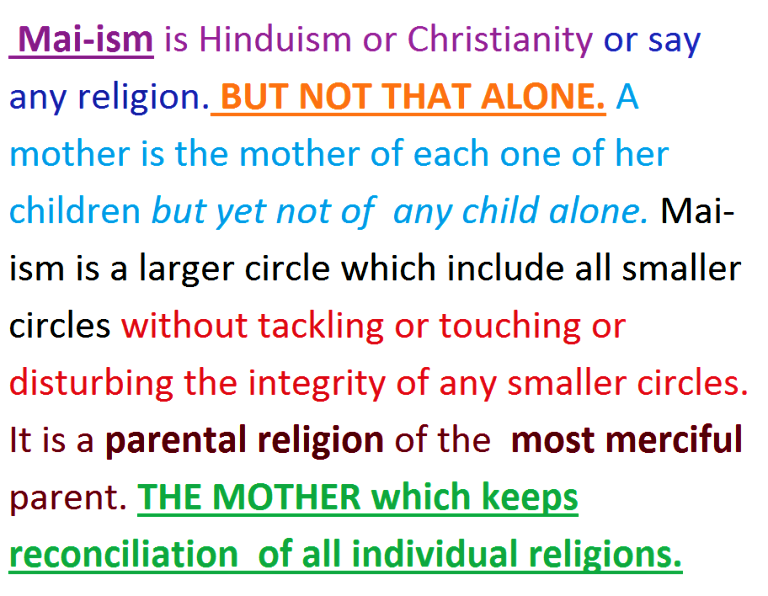 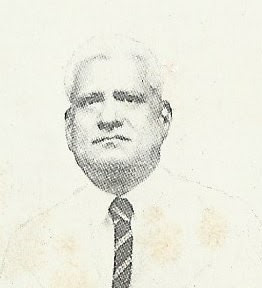